I married a fly fisherman, despite having no interest in fly-fishing. I even managed to avoid the sport despite spending the last 18 years on a river in Colorado and working as a professional raft guide.

For 40-some years on the planet, I maintained a sterling 0-for-0 record in the fish department. The Selway River would prove my undoing.

Located in Central Idaho in the midst of the Selway-Bitterroot Wilderness, the Upper Selway River is a 47-mile stretch of crystalline water, cedar-scented shorelines and impossibly steep and green hillsides.

Most forest fires there are allowed to burn because they are simply too remote to reach. Only 63 permits are given out each year, making it tougher to snag a trip on this northern beauty than just about anywhere else.

My husband and I accepted the invitation before the words were fully out of the trip leader’s mouth. We’d been trying to get a permit for 18 years.

But when we were a week away from departure, I was hesitant. Though I’m a competent rower, I’d spent more time recently pushing keys on the computer than pushing oars.

I blame Pam Houston for my lack of enthusiasm. She ruined me for the Selway in her instant classic “Cowboys are my Weakness.” I read her harrowing story in 1995, the same year I started guiding commercially. She misguidedly ran the river at particularly high water – all in the name of love or lust or something like it. I don’t remember the details other than the endless string of boat-flipping holes and back-to-back, boulder-choked rapids. In 1995, I was intrigued. In 2013, I was not feeling at my most confident.

Thanks in large part to a friendly water level, the rapids on the Selway were long on fun and short on scary. We all had clean runs and the people, most of whom I’d never met, proved an amiable and competent crew. My husband and I were enjoying more laughs than we’d shared in months.

The Selway corridor is at once intimate and imposing. It’s a narrow river flanked by towering, steep slopes smothered in lush, green trees. I was attuned for sightings of bears and rattlesnakes. The only land animals we saw were a few eagles and osprey, plus a butterfly that took up residence on my bare arm for nearly three hours one day. The water is so clear you find yourself pointing it out multiple times a day, as if to confirm what you’re seeing is real.

And, of course, there were the fish.

I’d been studying them for days. As I pushed out of an eddy, I sheepishly asked my husband if he would row so I could try out his fly rod. Barely concealing a pleased smile, he dutifully tied on the appropriate fly and I was sunk.

When it happened, it happened fast and I squealed like a little girl. “I got one! What do I do? Am I hurting it? I don’t want to hurt it.” Whereas fishing brings out the Zen in most people, apparently it brings out my bossy and high-pitched side.

And it is remarkably fun. In an instant, I fell in love with this surprisingly graceful dance of gently touching the fly on the water and playfully tempting the fish to bite.

I couldn’t NOT catch a fish.

One after another, I would reel them in and my husband – the saint that he is – would carefully release them off the barbless hooks. I must have caught 20 fish that first half hour without touching a single one with my hands.

Though I wouldn’t stop casting, I was conflicted. Every time I’d feel the tug of the line, instant remorse washed over me. I would reel in the little guys and become overwhelmed with the cruelty of snagging them with a hook purely for my own sick pleasure.

Then again, every time I’d reel one in, the little devil sitting on my other shoulder would whisper, “Now I want a bigger one.”

When I think of the Selway in the future, I’ll be grateful that we weren’t running it high water. I’ll talk about the middle line in Ladle, sautéing fresh morel mushrooms scavenged from the hillside, and maybe plan to run the 50-mile trail that parallels the length of the stretch. I’ll have to mention the clarity of the water, which could easily be transplanted to a pristine cove in the Caribbean if the colors were more tropical. And I’ll talk about fishing, but not too much.

There was an instant connection with the fish on the Selway. It’s one that I’m a bit ashamed of because I’m not sure I want to risk ruining the experience by ever fishing again. Maybe my childhood belief that I could communicate with animals isn’t that far-fetched. Maybe those fish opened my eyes to a glorious river I hadn’t fully been appreciating. Against all logic and contrary to all my guilt, I like the thought that I may just be a natural.

Ahh, probably not. Those fish on the Selway River will strike for anyone.  —Brook Sutton

Golf and the Outdoors: a Cinderella Story? 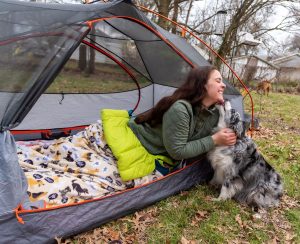 How to Camp in Your Own Back Yard

A SUP Adventure on Film

Giving thanks to our gear