There’s a map of the world on Helge Pederson’s website that shows what seems to be countries’ borders outlined in red. Then it hits you. The red lines aren’t boundaries; they are a crimson visual of all the miles Pederson has traveled on his BMW R80GS motorcycle.

Over the course of 10 years and 250,000 miles, Pedersen rode his way around the world. Though his circumnavigation was complete, his wanderlust and curiosity were far from sated. Between his original trip and ensuing adventures, he’s visited over 100 countries on six continents on his bike.

Recently, Pedersen joined the Nikwax Faction pro team. With his home base in Seattle, Pedersen still spends plenty of time exploring the world with other travel enthusiasts, via his motorcycle touring company Globeriders. “Enthusiasts” and “touring” are far too subtle terms for the type of riders and adventures Globeriders caters to.

Take for example the first trip Globeriders offers in 2014: Cape Town to Paris. Yes, that Cape Town. South Africa to France via the east side of Africa, a swing through the deserts of the Middle East and on to hug the coast of the Mediterranean Sea before hanging a right to the City of Lights. Pedersen and three other riders will take 115 days to cover 25,000-km. This is not a tour. This is an expedition.

As of this posting, Pedersen is en-route to South Africa. When they start their engines to begin the African-Middle Eastern-European odyssey, you can follow along via a Live!Journal on the Globeriders site.

Nikwax is proud to sponsor Helge Pedersen in his pursuit of modern-day adventure and global understanding. We’ll be following the trip with wonder and fair shake of envy. Safe travels!

Nikwax Guide to Giving Gifts that Keep on Giving 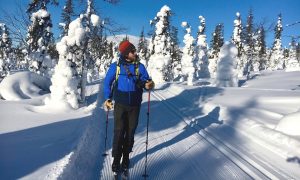 The Nikwax Journal: “Finding A Home Away From Home, In Finland”

Paddleboarding (and other outdoor activities) While Pregnant